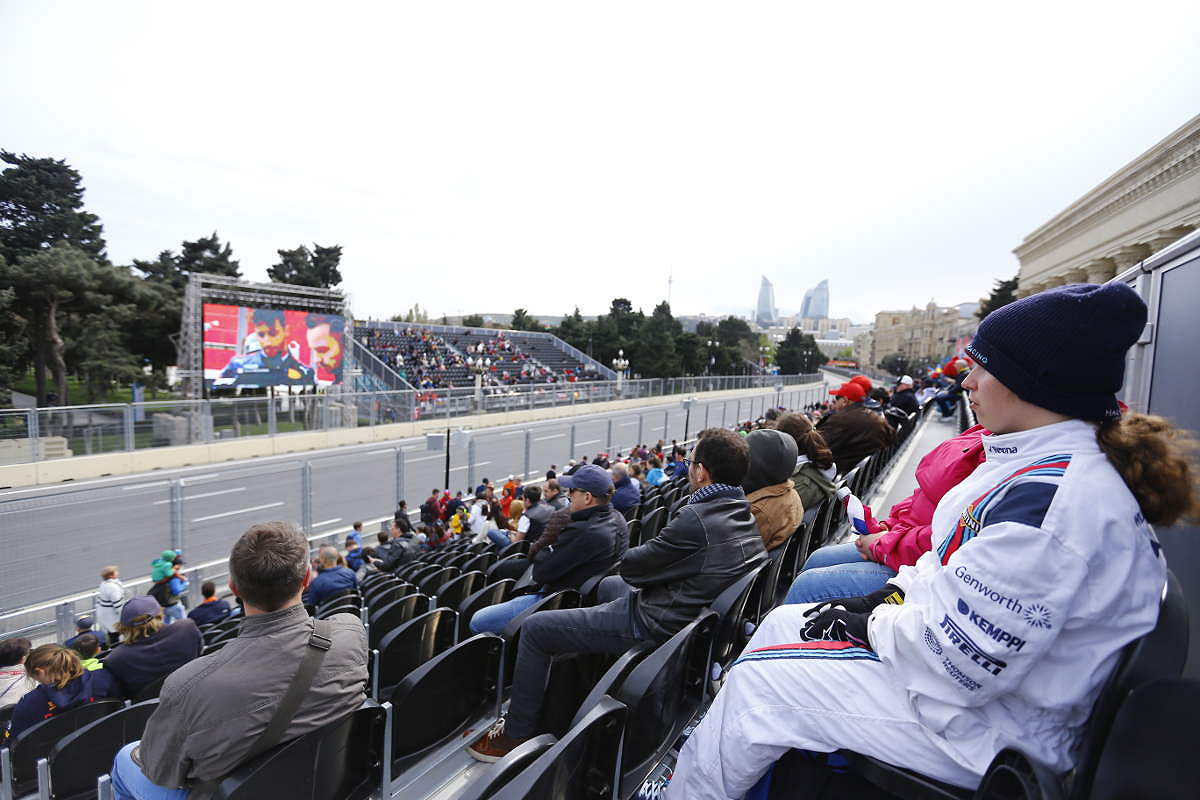 What can I see?

Located in front of the Museum Centre and facing the Bulvar grandstand, Khazar offers views of the cars as they head towards the start/finish line at maximum speed. From this area, drivers will be preparing to engage their DRS in an attempt to set up overtaking opportunities coming into the first corner.

What do I get with my ticket?

You will have a reserved seat in the Khazar grandstand, as well as access to the entertainment activities and all zones at the circuit. Your ticket will also include access to the after-race concerts at Baku Crystal Hall for each relevant day.

Very friendly and helpful staff. Inside circuit extremely clean plenty of toilets with very little queuing. Fabulous chill zones with lots bean bags. Good choice of food unless you’re vegetarian reasonably priced. Not allowed to take food or drink into the circuit. Excellent security going in bags and people scanned. Not long waiting times to get into the track. Plenty of staff to ensure this.

Me and my friend bought a 4 day pass. BookF1 are very punctual in sending the tickets and the information they share prior to the race is really useful. This is the second time I booked through BookF1 and will do in the future. Keep up the good work!

Baku is a must!

We booked tickets in the Khazar stand, easy to access and a good view of the cars as they approach the grid. The whole experience of the Azerbaijan Grand Prix and the city of Baku itself is an absolute must. Bookf1.com were great, very helpful and quick to respond to any enquiries via email.

Track and race are awesome but entertainment needs improvement (Crystal Hall is too far, concerts should be on the track in the fan zone)

Well worth a trip, excellent GP

Very clean spotless facilities, other European GP’s could learn a thing or two from Azerbaijan. All food and drink the same price from food outlets, half litre bottle of water was around 70p, and no queuing for anything. Lots of activates happening outside of the track events. We booked the Khazar stand, I think probably one of the best viewing stands on the circuit, try and get a seat towards the top. The race starts at 5pm and the sun was setting behind the building directly behind our stand, the top five or so rows were in the shade whilst the qualifying and race started. An added bonus is Baku itself with some amazing buildings to explore

Bookf1 is great. I will book with them again. As for the Baku track, very limited view of the track (my grandstand Khazar is great) and hard to travel around. Overall great city to expore but alot of preplanning will help alot!

Bookf1 is great. I will book with them again. As for the Baku track, very limited view of the track (my grandstand Khazar is great) and hard to travel around. Overall great city to expore but alot of preplanning will help alot!

First race in Baku, very good all round.

So being a city circuit access was no problem, we stayed in Landmark hotel which is literally on the circuit, so 10 minute walk into circuit. We stayed a week so saw the track gradually coming together all week, which is quite a unique experience walking the circuit avoiding busses, taxis, trucks cars etc. The facilities were great, lots of food and drink and entertainment, only thing with it being so spread out over about 2km it seemed a bit of a walk in the heat to the different areas, but the good side meant you never felt crowded and always find space to sit. The staff and volunteers were a bit bemused at first but got better as the weekend went on, I guess first time its to be expected. The evening music gigs were great, well organised, bit late coming on but you expect that. All in all the facilities were great on a par with Bahrain, lots to do aside from the racing. As for the racing, track is very good, view in Khazer was great as you can see cars going in bother directions and a screen opposite too, plus by time race started sun had dipped below building behind so not sat in the blazing sun (34C) for the race. The race itself proved a little lacking in excitement, but that happens at times. The track is certainly good enough for a great race. Baku itself is a great place, well worth a visit, hopefully this race really takes off in the calendar and people come along. Thursday and Friday was very quiet, which made for the best pitwalk I have been on, no queues at all. Driver signings were good too. A little disorganised at first but then they got the hang of it. They had a massive number of volunteers, almost as many as paying guests and only slight gripe was they seemed to be enjoying the experience as much as the paying public, just watching racing getting photos and generally not really doing a great deal to help people, but again with a load of youngsters I would have been exactly the same if it was me doing that. It was a great week and will only improve I would return again and encourage others too. If I went again the Icheri Sheher stand looks to be an excellent viewing area with the cars slowing in the narrow old town section. Hopefully next year Lewis will have a bit more luck, the result was the only bad point for me. But at least I met him finally !!

A superb city and excellent facilities

This is my 7th race (all in different countries). I'd rate this as my favourite location, not only is the city amazing (loads to see and do), and packed full of lovely people but the other great thing is it's very cheap! e.g. pints in the arena were only &pound;1.80! We went to 2 of the 3 concerts and they were really good (Enrique and Pharrell), they were busy but not crazy busy like you get at UK festivals so you can get really close to the stage with ease. Re the stand, it got very hot during the day and black seats probably aren't the best idea! However, the best bit about this stand is the building behind shades you from 5pm which is when the race started so that was nice. I think if you want to tie in a great city break with probably the cheapest location on the race calendar then this is your place. Oh and the people are mega passionate to be hosting this event and it comes across in all your interactions, be it with security, volunteers, bar tenders, etc... They did their country mega proud. 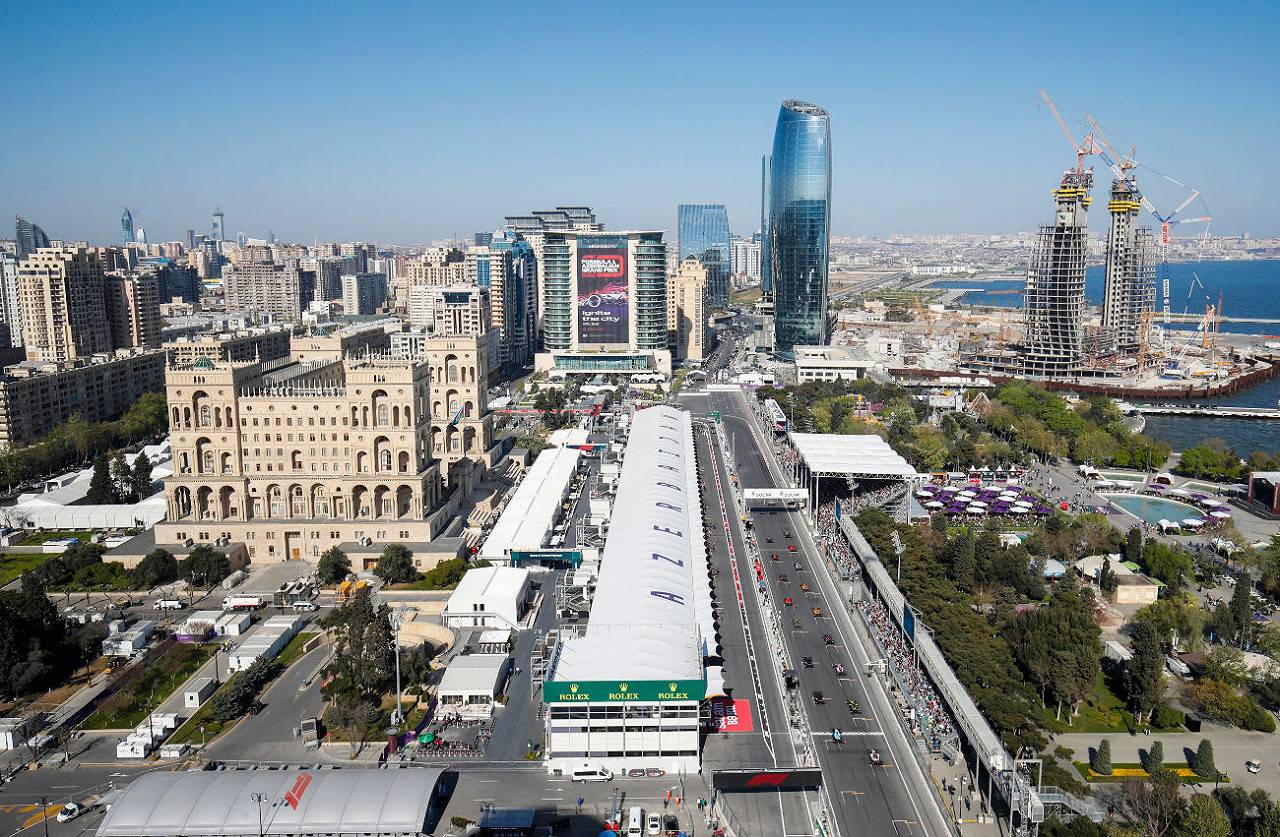 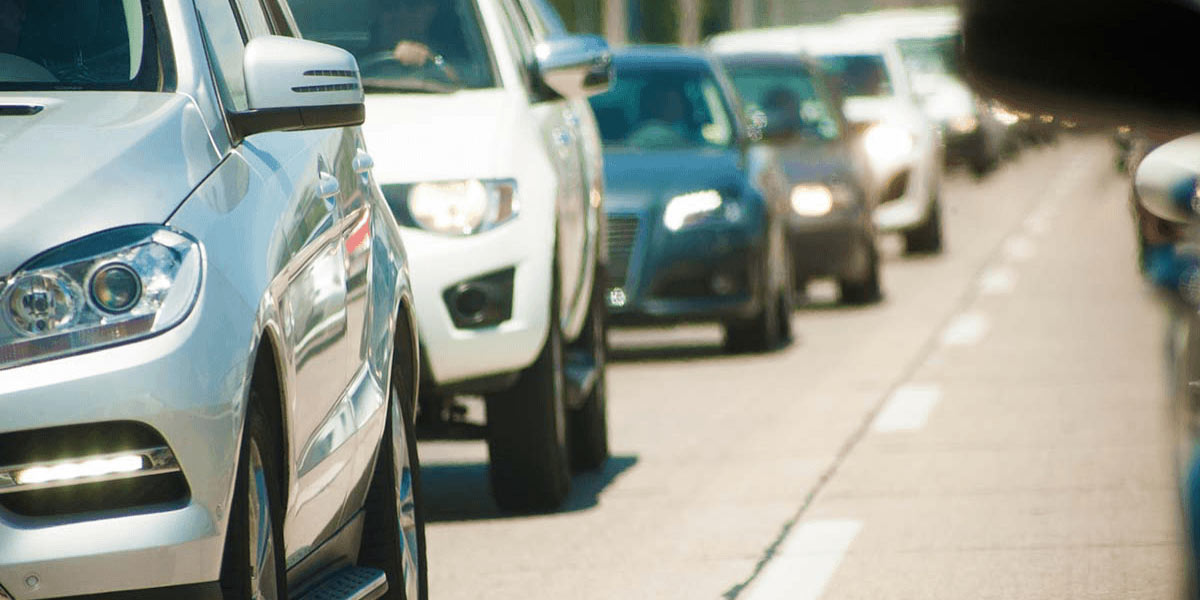